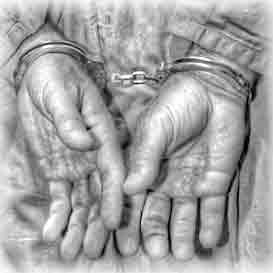 Probation is community supervision with specified conditions. If you have been charged with a Probation Violation, Violation of probation, VOP or Probation Non-compliance in Florida, W.F. “Casey” Ebsary, Jr. (813.222.2220) can and will protect your rights. Some circuit courts have special divisions to handle violation of probation allegations.

Video: What is Probation?

Video Transcript: What Is Probation? Probation is an alternative to jail or prison. Usually, courts will impose that sentence to insure that restitution is paid to victims, drug testing conditions are met, counseling is completed, community service hours are completed, and fines and court costs are paid.

We can help you, your friend or loved one. We want to prevent or minimize time spent in jail, in either event. Standard conditions of probation include: no violations of the law, monthly reporting requirements, not changing residence or employment or leaving the county without the consent of the probation officer, submitting to random drug testing and searches, and paying cost of supervision. There are sometimes special conditions of supervision imposed by the judge including: substance abuse or mental health treatment, victim restitution, and community service hours.

Video: What is a VOP?

Video Transcript: What is a violation of probation VOP? First, it’s important to remember that when probation is violated many courts do not allow for Bond when taken into custody. The defendant will remain there until presented before the court. There are two types of violations of probation. One is a technical violation a violation where some conditions such as community service hours or restitution has not been paid. The other more serious violation is a substantive violation where someone is arrested on a new charge while on probation. Either one of these violations can result in jail with no bond until the judge, prosecutor, and your defense attorney can sort it all out.

How do prosecutors prove a violation with a drug test?

Drug testing is often a condition of probation. This is true in both drug crimes and DUI cases. Depending on where you were placed on probation, a judge can take evidence of a failed field drug test, a lab report, and the testimony of an experienced probation officer to establish a violation of probation.

How do DUI and Drug Crimes Prosecutors prove a VOP using the results of a failed drug test?

Here is an example of how courts handle allegations of drug use for people on probation. In Tampa drug crimes and DUI cases, courts may require appearance of laboratory witnesses to authenticate a failed drug test. Queior v. State, 157 So. 3d 370, 373 (Fla. 2d DCA 2015), rev. granted, No. SC15-367, 2015 WL 1894002 (Fla. April 14, 2015). The Tampa Bay court of appeals found “testimony about the field test results was not competent, nonhearsay evidence that [the defendant] Mr. Queior had used an opiate in violation of his probation.” Queior, 157 So. 3d at 374″ The court may have reasoned that holding that because the probation officer is not a chemist who could give expert testimony sufficient to explain the science behind the test or render an independent expert opinion regarding its reliability, his testimony was not competent.

However, the state prosecutors regularly seek to prove a violation of probation using the results of a failed drug test by calling the probation officer from the Department of Corrections to testify regarding the conditions of probation. The probation officer then testifies as to what he or she did and observed when collecting the urine sample from the defendant and administering the presumptive “field” test, along with the test’s positive indication of drug use. Some Florida courts have concluded, “We are satisfied that in the context of a probation revocation hearing, the [lab] . . . report qualified as sufficiently reliable prima facie evidence that [defendant] appellant had tested positive for illegal drug use.”

“Florida courts seemed to have generally accepted that the probation officer who conducted the presumptive drug test could testify to the results at the VOP hearing, so long as the officer had the training or experience necessary to understand the test and interpret the results.” In felony cases involving the Florida Department of Corrections, the field test in confirmed by a laboratory test. These tests are referred to as gas chromatography/mass spectrometry or immunoassay tests. “[T]he lab report is introduced as hearsay, which . . . is admissible in a violation of probation hearing.”

“In Florida, however, the Department of Corrections [also] appears to always confirm the result of the field test by sending the sample to a laboratory for independent testing (using an even more accurate and sophisticated technology). This is clearly the better and more widely accepted practice. See Cathryn Jo Rosen, The Fourth Amendment Implications of Urine Testing for Evidence of Drug Use in Probation, 55 Brook. L. Rev. 1159, 1167-68 (1990) (“Professionals in the field generally recommend that screening test results be confirmed through the use of [gas chromatography/mass spectrometry] or one of the other confirmatory techniques in situations in which positive test results ‘have an impact on the life, liberty, property, reputation, or employment of the person being tested.'” (quoting Council on Scientific Affairs, Scientific Issues in Drug Testing, 257 JAMA 3110, n. 24 (1987))). Of course, “confirmatory tests are expensive[,]” which is why “in some jurisdictions, probation officers have sought to revoke probation on the basis of either a single, unconfirmed [screening] test, or a second, ‘confirmatory,’ [screening] test using the same method on the same urine sample.” Rosen, Supra, at 1168.”

Read the Complete Ruling of a Court on Use of Field Tests to Prove a Violation of Probation in Court. 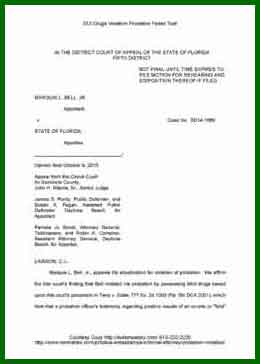 What is the Science of drug tests used in Florida Courts?

To be used against people in court in a violation of probation hearing, the prosecutor must prove that a probationer used or possessed illegal drugs. Usually, Florida Criminal Courts require three or four things: 1) a failed drug test; 2) given by a qualified probation officer; 3) a lab report; and sometimes 4) testimony of a laboratory representative.

What is the scientific basis for laboratory chemical testing for drug use?

Here are more details of the science used by prosecutors to prove violations alleging VOP for a failed drug test. These tests are referred to as gas chromatography/mass spectrometry or immunoassay tests. “[T]he lab report is introduced as hearsay, which . . . is admissible in a violation of probation hearing.” “An immunoassay test or, more properly “immunochemical assay” test, detects a “drug or its metabolites in the urine” because the substance acts as “an ‘antigen,’ combining with antibodies to the drug to form antigen-antibody complexes that can be detected” by a substance used in the laboratory or drug testing kit. Zeese, Drug Testing Legal Manual ‘ 2:23 (2d ed.). “There are three basic types of immunoassays: enzyme immunoassays, radio immunoassays, and fluorescent immunoassays.” Id. “Immunoassays have been in existence since the 1950s and have been used to analyze biological fluids for low levels of enzymes, hormones, and drugs.”

Help with a Violation

Whether you already have or think you might violate the conditions of your probation, we can provide a solution. Call today at 813.222.2220 for a free initial consultation. If it is more convenient for you, we respond quickly to your call for help via our Call For Help web submission.  We are constantly checking and responding, and will quickly get back to you via telephone or email.