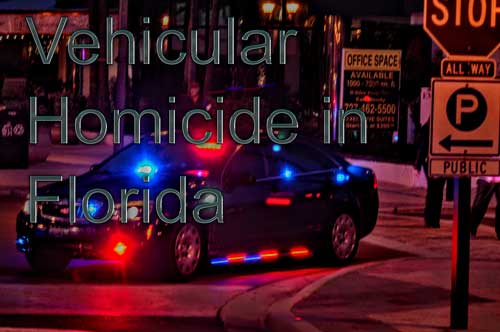 Can a Speeding Vehicle that crashes and results in the Death of a Passenger Result in Vehicular Homicide Charges in Florida?

Vehicular Homicide charges can be filed after a death in a crash. However, speed alone will not be enough to be convicted. The law differentiates between negligent driving conduct, which exposes a wrongdoer to civil liability, and criminal driving conduct, which subjects a person to incarceration and other criminal sanctions. Case law strictly construes criminal driving statutes to prevent the net of the criminal law from sweeping so broadly that it snares all conduct, both criminal and negligent. The lenity principle codified at section 775.021(1)- (2), Florida Statutes (2014), requires criminal statutes to be strictly construed in the accused’s favor. See State v. Byars, 823 So. 2d 740, 742 (Fla. 2002); McGhee v. State, 847 So. 2d 498, 503 (Fla. 4th DCA 2003).

Part of the rationale for this approach is historical, deriving from common law crimes, where there was “the ancient requirement of a culpable state of mind.” Morissette v. United States, 342 U.S. 246, 250 (1952). To blur the line between mere negligence and criminal intent would, borrowing Justice Jackson’s words, “ease the prosecution’s path to conviction, [ ] strip the defendant of such benefit as he derived at common law from innocence of evil purpose, and [ ] circumscribe the freedom heretofore allowed juries.” Id. at 263.

“In determining whether a defendant was driving recklessly, the essential inquiry is whether the defendant knowingly drove the vehicle in such a manner and under such conditions as was likely to cause death or great bodily harm.” Santisteban, 72 So. 3d at 195. Although the defendant need not have foreseen the specific circumstances causing the death of the victim, the defendant should have reasonably foreseen that the same general type of harm might occur if he knowingly drove his vehicle under circumstances that would likely cause death or great bodily harm to another. Id. “Speed alone does not constitute reckless conduct unless the speed is shown to be grossly excessive.” Rubinger v. State, 98 So. 3d 659, 662 (Fla. 4th DCA 2012).

In cases affirming convictions for vehicular homicide or manslaughter by culpable negligence, it is excessive speed, in combination with other factors, that support the convictions. For example, in Copertino v. State, the defendant was driving 90.41 mph in a residential area in a Honda Civic packed with nine persons, “7 of whom were crammed into the back seat without seatbelts.” 726 So. 2d 330, 333 (Fla. 4th DCA 1999). We held that these facts evinced “the required reckless disregard for human life or the consequences on the safety of his passengers” contemplated by the manslaughter statute. Id.

Similarly, in Pozo v. State, the defendant was looking for a compact disc when driving anywhere from 67-90 mph in a residential neighborhood, while heading into a rain shower. 963 So. 2d 831, 833-34 (Fla. 4th DCA 2007). We held these facts to be sufficient to withstand a motion for judgment of acquittal. Id. at 834.

Recently, this Court affirmed the denial of the defendant’s motion for judgment of acquittal on a vehicular homicide charge. Opsincs v. State, 185 So. 3d 654 (Fla. 4th DCA 2016). “The State’s expert testified that the speed limit was 50 mph and that appellant’s speed was 69 mph at the time of impact. The roads were wet from the rain earlier in the day.” Id. at 657. Moreover, “[i]mmediately before the accident, appellant swerved through traffic, rapidly approached the traffic light while looking down and without braking, and ran a light that had been red for nine seconds before impact.” Id. And in Lewek v. State, the defendant was traveling 60 mph on a residential road with a 45 mph speed limit, in a car with unsafe equipment, and he ran a red light that had been red for five seconds. 702 So. 2d at 531. We held these facts sufficient to support two vehicular homicide convictions. Id.; see also Santisteban, 72 So. 3d at 196 (vehicular manslaughter conviction affirmed where driver of a gasoline tanker filled with 9,000 gallons of fuel went 56-60 mph on a curving highway ramp with an advisory speed of 35 mph, while weaving and cutting off other drivers).

In Stracar v. State, 126 So. 3d 379 (Fla. 4th DCA 2013). There, this Court reversed convictions for two counts of vehicular homicide after finding that the state failed to show that the defendant was driving in a reckless manner. Id. at 380. In denying Stracar’s motions for judgment of acquittal, the trial court detailed the facts of the case: The evidence at trial was that the Defendant [Stracar] was driving a vehicle which left the roadway, traveled along a sidewalk and a grassy area, crossed a divided roadway and hit a sign which launched the car over a median of the intersecting street and land[ed] on the victims [sic] car crushing the two occupants. Ms. Stracar traveled … for over 500 feet at approximately 40 miles per hour. She suffered no serious injuries and was found conscious in her vehicle at the scene. She had to be removed through the roof due to crash damage. Id. “There was no evidence of any braking or other attempt by appellant to avoid the crash, nor were there any curves in the roadway which would have contributed to appellant losing control of her vehicle.” Id. at 380-81. Moreover, at the time of the incident, “the weather conditions were optimal and the pavement was dry.” Id. at 381. Three hours after the accident, Stracar’s blood test results indicated a blood alcohol level of “less than .02%, THC from marijuana use at some undetermined time, oxycodone at a potentially therapeutic level, and Xanax within therapeutic levels.” Id. There was no evidence of unsafe or erratic driving prior to the accident. Id. This Court held that “appellant’s actions, while certainly negligent, did not rise to the level of recklessness sufficient to sustain the convictions for vehicular homicide.” Id. [W]hat was missing from the State’s proof in this case is evidence that the appellant, in an intentional, knowing and purposeful manner, was driving at the time of the incident in a manner demonstrating a conscious and intentional indifference to consequences and with knowledge that damage is likely to be done to persons or property. Id. at 382.

Here is the Florida Association of Criminal Defense Lawyers Summary of Damoah v. State, 41 Fla. L. Weekly D957b (Fla. 4 th DCA 2016) –  Damoah drove a car that crashed on a I-95 exit ramp. The crash caused the death of her  boyfriend. She was convicted of vehicular homicide and sentenced to 12 years in prison. On the  date of the incident, the exit ramp was technically a Department of Transportation construction  zone, even though no construction machinery or barriers were present. Construction had been  finished and the roadway repaved, but the Department had not yet given its final approval. As a  result, no speed limit signs were posted. The evidence was insufficient to support the conviction  for vehicular homicide. Excessive speed alone, without a showing of other reckless conduct, is  insufficient to support a vehicular homicide conviction. The evidence was also insufficient to  support a conviction for the lesser included offenses of reckless driving and culpable negligence.  The court remanded for the trial court to enter a judgment of acquittal and discharge her.