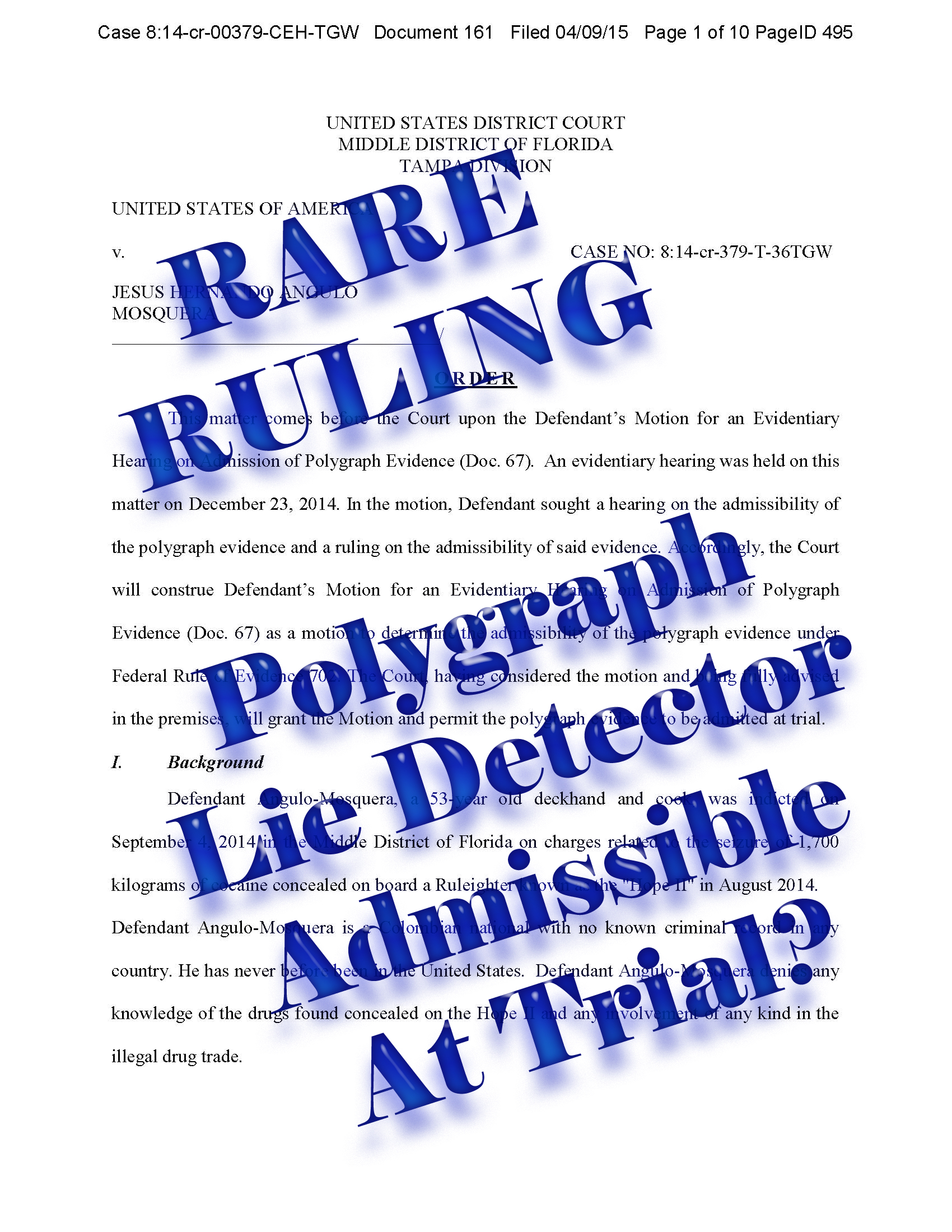 “In law school and on the street everyone knows that lie detectors are not admissible in court. Wrong!”

A crew member of a ship claimed he did not know drugs were on board the ship. He was indicted in the Middle District of Florida’s Tampa Division. They indict them all, let the jury sort them out indictment charged many aboard with knowing the ship had drugs on board. This is not a rare claim where smugglers tend to minimize the need to know that 10-100 million dollars of cocaine is on board the vessel. Judge says let them use the polygraph. The best way to understand the polygraph case is to read it here.

“There were three important lessons learned from this experience: 1) it is important to have the testimony of a qualified scientist, such as Dr. David Raskin, to testify in the Daubert hearing as the polygraph examiners are usually not well-versed enough in the scientific studies supporting the technique; 2) using a highly qualified examiner with extensive prior government experience is also critical, and 3) the relevant questions must be simple enough but carefully constructed so the results of the exam are indisputably meaningful.”

“[I]it helped to submit Dr. Raskin’s declaration in advance of the Daubert hearing so that all of the detailed support for the polygraph’s admissibility was on the record in advance, making the actual hearing go much more smoothly.”

Is the Lie Detector | Polygraph | Admissible in Federal Court?

Yes. A United States District Judge in Florida’s Middle District, Judge Honeywell ruled in this Order that the court would allow admission of a polygraph performed by a former FBI agent on a defendant at trial. The defendant will testify at trial and has passed a pretrial polygraph.  Here are the relevant questions:

1. Did you know those drugs were on that ship before the Coast Guard boarded the ship? Answer: No.

2. Did you know those drugs were on the Hope II before the Coast Guard boarded that
ship? Answer: No.

3. Did you know those drugs were on that ship before the Coast Guard found them in
August? Answer: No.

“[T]the Court held an evidentiary hearing to determine the admissibility of the polygraph evidence and expert testimony regarding same, under Federal Rule of Evidence 702 (“Rule 702”) and Daubert v. Merrell Dow Pharmaceuticals, Inc., 509 U.S. 579 (1993). At the hearing, Defendant Angulo-Mosquera presented the testimony of Dr. David C. Raskin, who for 44 years has conducted laboratory and field research on polygraph techniques for the detection of deception, taught university courses about polygraph techniques, trained government and law enforcement polygraph examiners, and published extensively on polygraph techniques, regarding the reliability of polygraph examinations in general and the examination in this case specifically.”

“Thus, in determining the admissibility of expert testimony under Rule 702, courts must engage in a rigorous three-part inquiry, determining whether: (1) the expert is qualified to testify competently regarding the matters he intends to address; (2) the methodology by which the expert reaches his conclusions is sufficiently reliable as determined by the sort of inquiry mandated in Daubert; and (3) the testimony assists the trier of fact, through the application of scientific, technical, or specialized expertise, to understand the evidence or to determine a fact in issue.”