Home» Blog » The Sleeping Driver and DUI and Actual…

The Sleeping Driver and DUI

Here are a few tips to avoid becoming the next sleeping driver with a DUI in Florida.

DUI and Actual Physical Control of a Car

As the holiday travel season approaches, in Florida many people will be taking long trips by car. Some drivers may have had a bit to drink and be in actual physical control of their car. Is it safe to pull over and take a nap? That depends. If you have been drinking and have alcohol on your breath, it is likely that police may try to push the limits and arrest you. Even if you are a sleeping driver, not driving on the road, cops can bust you for being in Actual Physical Control of a Car while impaired or DUI.

“The firetruck’s air horn sounded and [the driver] rolled down his window, allowing [the officer] to smell the odor of alcohol emitting from him.” 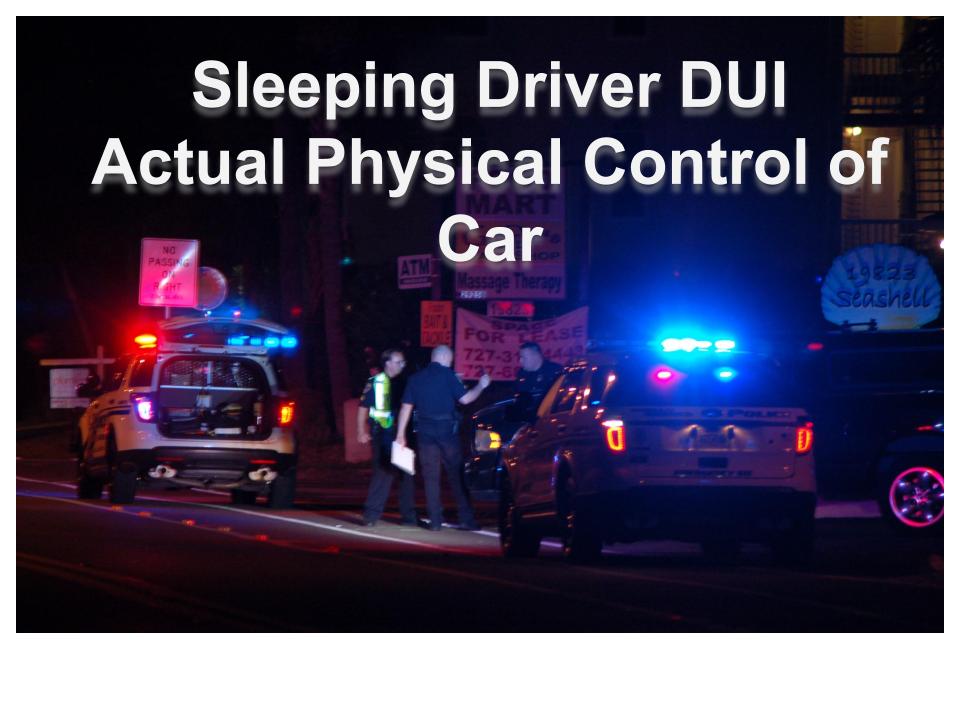 Here are a few tips for pulling over for a nap:

Typically, the police will try to get you to roll down the windows and see if they smell the odor of alcohol emanating from your breath. While the police do have the opportunity to check on your welfare, they do not have the right to order you from the vehicle when they have not observed a violation of the law. I have found a recent court order where the judge ruled the police did not have the right to force someone to open the window of their vehicle after the police observed the driver sleeping.

The driver “was not obligated to roll down his window and acknowledge the officer.”

In one recent case, the officer observed a vehicle parked in a parking lot. The officer approached the vehicle to check on the driver’s welfare. Once the driver woke-up and responded,

and even though the driver was in actual physical control of the vehicle with the officer tapping on the window, the officer can not demand the driver to ultimately have the window of the car opened.

First responders used the loud horns of an ambulance to arouse the driver and when the driver opened the window in response to the ruckus. “[T]he firetruck’s air horn has sounded and [the driver] rolled down his window, allowing [the officer] to smell the odor of alcohol emitting from him.” The Court ruled that the officer had violated the Fourth Amendment since there was no reasonable suspicion of criminal activity. The driver “was not obligated to roll down his window and acknowledge the officer.”

THIS CAUSE came before the Court upon Defendant, Dontay Dejuan Brown’s Amended Motion to Suppress, filed on January 23, 2018 and heard on March 16, 2018. Having considered the Motion, evidence presented, and argument of counsel, the Court finds the following:

On December 2, 2017, at approximately 7:00 a.m., the Titusville Police Department was contacted about an individual who was slumped over the steering wheel of an automobile that was parked in the Krystal’s parking lot. Titusville Police Officer Mark Fourtney responded to the location and observed the automobile, which was still running. The officer testified that there was no indication of any criminal activity and that he was there for a welfare check.

Mr. Brown argues that there was no need for a welfare check. The Court finds that the welfare check was permissible to the extent that Officer Fourtney was allowed to alleviate any concern’s he might have for the driver’s health. It is clear from Officer Fourtney’s testimony that there was nothing about the way or where the vehicle was parked that would indicate that there was anything wrong with the driver. The driver was slumped over the steering wheel, apparently asleep, and responded to the window taps by moving his body away from the noise. There was nothing about Mr. Brown’s behavior that indicated that he was incoherent.

Investigation Not Based On Reasonable Suspicion

Contrary to the State’s assertion, this case is not factually similar to Dermio v. State, 112 So. 3d 551 (Fla. 2d DCA 2013) [38 Fla. L. Weekly D776a]. Dermio involved an individual who was found with his head “cocked to the left side and had a cell phone lodged between his shoulder and cheek.” Id. at 553. Further, the Defendant woke up but seemed “really out of it.” Id. Thus, the deputy had a continuing concern for Dermio’s safety. Id. Officer Fourtney’s community caretaker duty was satisfied when the Defendant simply rolled away from the noise. There was no other evidence observed by the officer that Mr. Brown was ill. Thereafter, the officer was proceeding with an investigation which was not based upon a reasonable suspicion of criminal activity.

ORDERED AND ADJUDGED that the Defendant’s Amended Motion to Suppress is hereby GRANTED.

(1) A person is guilty of the offense of driving under the influence and is subject to punishment as provided in subsection (2) if the person is driving or in actual physical control of a vehicle within this state and: