Home» Blog » Can the police force you to give… 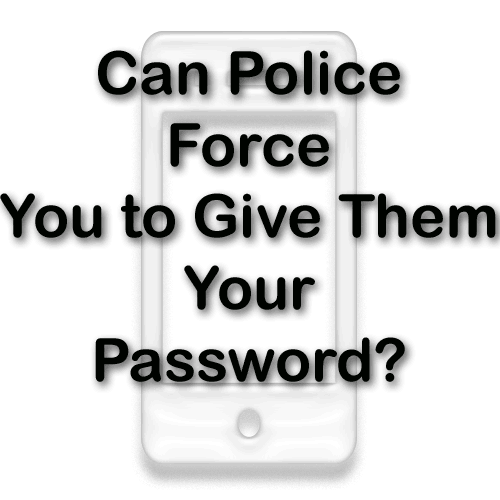 Can Police Force You to Give Up iPhone Password?

A court in Florida just ruled that a defendant could be forced to provide the password to his iPhone. A distinction is important – they got a search warrant. Without a warrant, the case may have been decided in favor of protecting the phone owner’s privacy. The phone had a cracked screen and had been allegedly used to take photographs that would have been useful in the prosecution of the phone’s owner. You can review a typical  iPhone Search Warrant here. At the bottom of this article are numerous other articles we have written on this topic.

Usually, we think that we have a right not to incriminate ourselves. However, this Florida Court in the Tampa Bay area ruled that providing the password did not constitute testimony against one’s self. In a convoluted 19-page ruling the court found that while there may be evidence of a crime, providing the passcode was not testimonial.

Here are some excerpts from the iPhone Court’s ruling.

“That an accused may be “forced to surrender a key to a strongbox containing incriminating documents,” but he cannot “be compelled to reveal the combination to his wall safe,” Doe, 487 U.S. at 219 (Stevens, J., dissenting), is another often repeated quote. See, e.g., Hubbell, 530 U.S. at 43; Doe, 487 U.S. at 210 n.9; In re Grand Jury, 670 F.3d at 1345; Kirschner, 823 F. Supp. 2d at 669. Despite the many cases referencing the quote, we have found none that provide details of “surrender[ing] a key.” We question whether identifying the key which will open the strongbox—such that the key is surrendered—is, in fact, distinct from telling an officer the combination. More importantly, we question the continuing viability of any distinction as technology advances. See Fisher, 425 U.S. at 407 (“Several of Boyd[ v. United States, 116 U.S. 616 (1886)]’s express or implicit declarations have not stood the test of time.”). In that respect, we are not inclined to believe that the Fifth Amendment should provide greater protection to individuals who passcode protect their iPhones with letter and number . . . . ”

“In this case, the communication was sought only for its content and the content has no other value or significance.11 By providing the passcode, Stahl would not be acknowledging that the phone contains evidence of video voyeurism. See Doe, 487 U.S. at 215. Moreover, although the passcode would allow the State access to the phone, and therefore to a source of potential evidence, the State has a warrant to search the phone—the source of evidence had already been uncovered. See id. Providing the passcode does not “betray any knowledge [Stahl] may have about the circumstances of the offenses” for which he is charged. See id. at 219 (Stevens, J., dissenting). It does not implicitly “relate a factual assertion or disclose information.””

” “The difficult question whether a compelled communication is testimonial for purposes of applying the Fifth Amendment often depends on the facts and circumstances of the particular case.” Doe, 487 U.S. at 214-15. Here, the trial court rested its determination that producing the passcode would be testimonial exclusively on the concept that production would require “the use of the contents” of Stahl’s mind. The phrase “the contents of the accused’s mind” has often been repeated in cases discussing the privilege. See, e.g., Hubbell, 530 U.S. at 43; Doe, 487 U.S. at 211; In re Grand Jury, 670 F.3d at 1345; Kirschner, 823 F. Supp. 2d at 669. And although the trial court correctly quoted the Eleventh Circuit’s statement in In re Grand Jury, that “[t]he touchstone of whether an act of production is testimonial is whether the government compels the individual to use ‘the contents of his own mind’ to explicitly or implicitly communicate some statement of fact,” 670 F.3d at 1345, the trial court did not consider the law as stated in Hubbell and Doe—that the contents of the accused’s mind must be “extensive[ly] use[d]” in creating the response, Hubbell, 530 U.S. at 43, or must “relat[e] him to the offense,” Doe, 487 U.S. at 2013.10 That is, “it is not enough that the compelled communication is sought for its content. The content itself must have testimonial significance.” Doe, 487 U.S. at 211 n.10 (emphasis added) (first citing Fisher, 425 U.S. at 408; then citing Gilbert v. California, 388 U.S. 263, 267 (1967); and then citing United States v. Wade, 388 U.S. 218, 222 (1967)). ”